Inflation over the last 12 months in the U.S. remained over 5 percent.  The August release of  the Consumer Price Index (CPI) data indicates that prices continue to rise way above normal as the economy tries to recover from the COVID-19 recession.  The figure below shows CPI inflation since 2011. 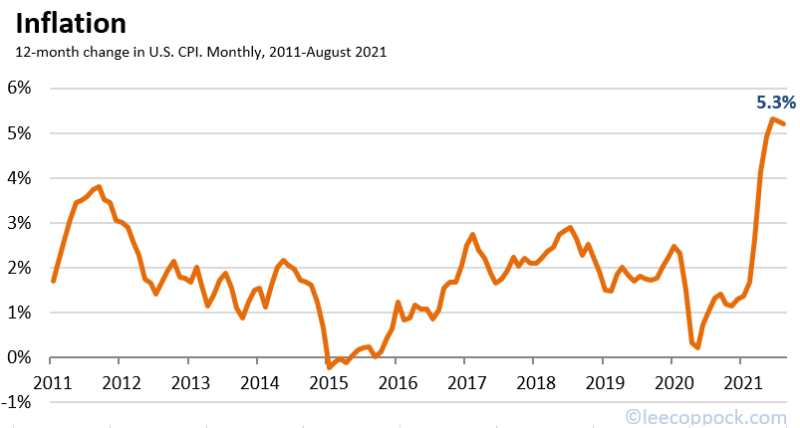 In recent history, inflation has averaged 2% or less, but the COVID recession and Federal Reserve responses have definitely pushed up price level increases over the past year.  Prices of some items in a typical consumers budget have risen drastically in the past year.  Among the biggest increases price increases were gasoline (+42.7%), car and truck rental (+52.6%), used cars and trucks (+31.9%).  Prices that fell over the past year include cheese (-2.4%), prescription drugs (-2.7%), and music subscriptions (-1.4%).

The latest jobs report brings news of lower unemployment and a growth in jobs in August. The unemployment rate for August, ticked down to 5.2% and nonfarm employment increased by 235 thousand jobs. In normal times, this would be great news. But these are not normal times. 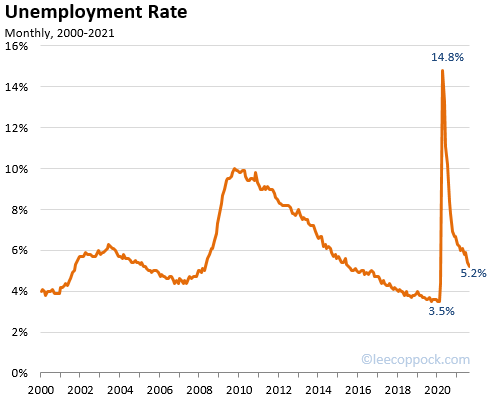 We can't celebrate over this news because it is a clear slowing of the recovery that was roaring through the early summer months.  In June and July, the U.S. economy added 962 and 1,053 thousand jobs.  In comparison, the August figures are just discouraging.

Furthermore, we've still got a long way to go before the economy really recovers from the darkest COVID days of last year.  The graph below shows total nonfarm employment in the U.S.  This is how we generally measure the level of jobs in the country. At the beginning of 2020, there were more than 152 million jobs.  This plummeted to just 130 million during the COVID shutdowns, but the recovery thus far is clearly incomplete.  Total nonfarm employment in August was just 147 million, down 5 million from the peak and at least 7 million from the pre-recession trend. 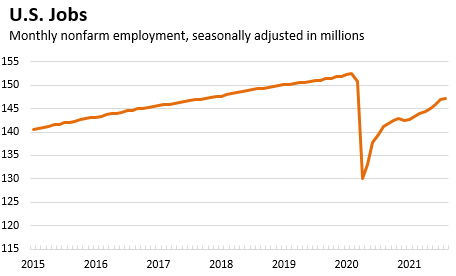 We all know the slowing is due to the Delta variant of COVID-19. And the effects are very real.  For example, as the BLS jobs report notes, 5.6 million workers were unable to work because "their employer closed or lost business due to the pandemic."

Posted at 11:53 AM in Aggregate Demand and Aggregate Supply, Economic Growth, Unemployment | Permalink