Real GDP grew by 1.9 percent in the third quarter of 2019, according to the report released by the BEA on October 30. This follows a 2.0% increase in the second quarter. Keep in mind, this is the first ("advance") estimate of third quarter data, and will be revised later. 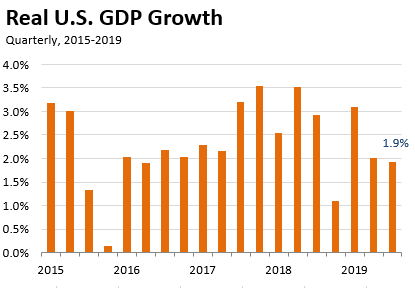 Consumption alone accounted for the 1.9 percent increase in real GDP.  Together, the other three components (investment, government spending, and net exports) were essentially unchanged.

Real U.S. GDP has grown at a relatively steady rate since 2009. It is currently estimated to be over $19 trillion.

Everybody wants to talk about an impending recession but let's take a moment to appreciate the longest expansion in U.S. history.  The first estimate of real GDP growth for the third quarter of 2019 is 1.9%.  This means the current expansion, which began in July 2009, is now marching into its eleventh year.  The graph below shows quarterly U.S. real GDP growth rates since 2015. 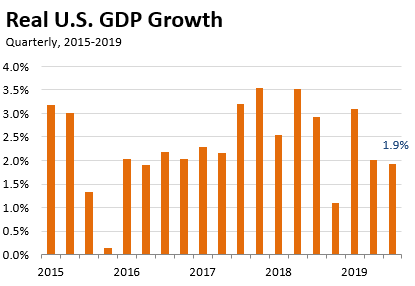 I'm first to admit that this expansion lacks the zip of many previous expansions.  But we haven't seen recession now for over 10 years and the unemployment rate is just 3.6 percent.

So while Hong Kong now seems to be in a recession, with real GDP falling 3.2% in the last quarter, the U.S. economy just keeps marching on.  At least for now.