The Longest Expansion Ever

Folks, the economy may be slowing, but we are now actually working on the longest U.S. economic expansion on record.  It has literally been a decade since the last recession.  To be fair, the effects of that recession (the "Great Recession") lingered long after it was officially over.  But strictly speaking, the last recession finished in June 2009.  Prior to this current expansion, the longest on record was March 1991 to March 2001, so we are just now edging out that previous record (assuming we don't go into a recession this month!).

The newest data release from the Bureau of Economic Analysis estimates real GDP growth for the second quarter of 2019 at just 2.0 percent, which is not great.  But the economy is still growing.  And don't forget the unemployment rate is still at historically very low level of just 3.7 percent.

That said, many economists are starting to worry about a possible recession on the horizon.  The figure below shows two sub-par (less that 3%) growth quarters in the past three. 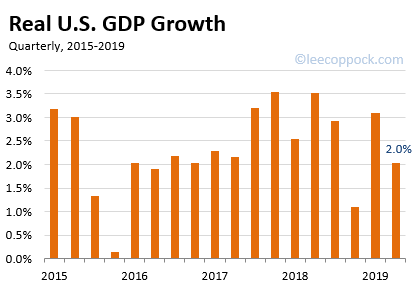 Economists blame the escalating trade war with China (and others) for the slowing economy.

But let's not end on that negative note: this U.S. economic expansion is the longest on record.