First Jobs Report of the Semester

This morning the BLS released its monthly Employment Situation Summary, the first jobs report of this academic year.  These reports are released on the first Friday of each month and they report U.S. labor market data for the previous month.  During this year, we will follow monitor at least three data series from these reports.  The first is the national unemployment rate, shown in the graph below.  The graph goes back to 2006 which is prior to the Great Recession.  Unemployment peaked in October 2009 at 10% but is now down to just 4.4 percent. 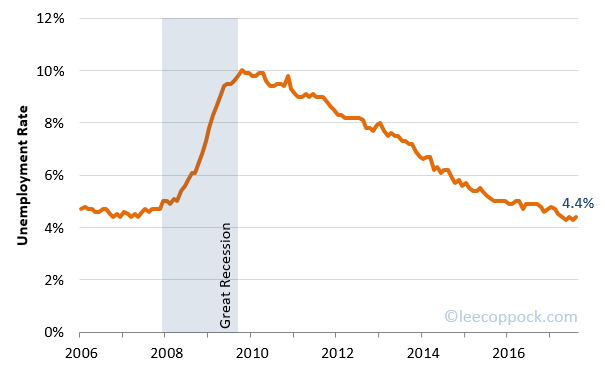 We will also watch to see how many new net jobs are created each month.  For this, we watch the series called Total Nonfarm Employment.  In August of this year, Nonfarm employment grew by 156,000 jobs.  That is a lot of jobs, but not necessarily in comparison to more than 153 million total nonfarm jobs in the U.S. economy.  In fact, this increase is below the average over the past five years (see graph below) of more than 200,000 per month. 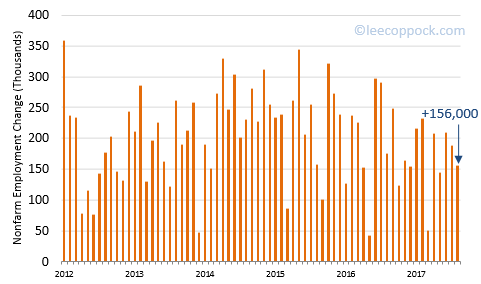 Finally, we will often report the labor force participation rate (LFPR).  This is the portion of the working age (non-institutionalized civilian) population that is either working or actively looking for work.  It has become important recently, as more workers are retiring and opting to stay out of the labor force for other reasons.  The graph below shows LFPR data since 2006. 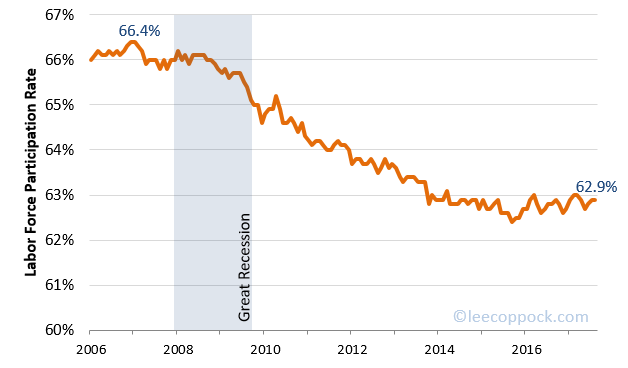 You can see that the LFPR has been hovering below 63% for almost four years.  This is very low by historical standards and you can see that it was 66.4% back in January of 2007.  This difference represents millions of workers that are now out of the labor force.