The advance GDP estimate for 2016 is sobering but also an opportunity to learn a little about the details of how we measure GDP. Let's look at the headline data first and then circle back for a quick lesson in GDP accounting.

Overall, GDP in the fourth quarter grew at just 1.9 percent, according to this first estimate.  This estimate will be revised over the next three months, but it is not encouraging.  The figure below shows real GDP growth by quarter back to 2006.  The last quarter of 2016 caps off an anemic year of 1.8% growth overall.  2016 pales in historical context, since average real GDP growth over the past 50 years was about 3 percent. 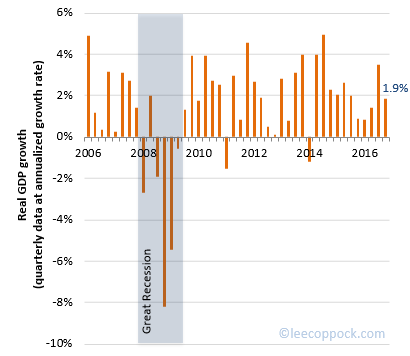 Now, let's dig a little deeper into the fourth quarter figures to see the contribution to growth from the four major categories of GDP expenditures: consumption, investment, government and net exports.  The table below shows how each of these components contributed to the overall growth rate of 1.9 percent. 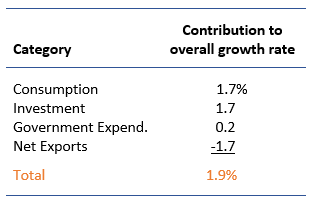 Growth in private spending on consumption and investment goods and services was strong.  But net exports (exports minus imports) pulls down the final number by 1.7 percent.  This is largely due to an increase in imports of $65.7 billion during the fourth quarter.  Now we get to the (boring) details of national income accounting.  Imports don't make us worse off - more imports mean we get more stuff from around the world.  But when we tally up gross domestic product (GDP), we subtract imports because they weren't produced here.

Posted at 11:05 AM in GDP, International Trade and Finance | Permalink