This morning, the BEA released the Advance Estimate of GDP for 2015, and boy is it disappointing.  Keep in mind that this estimate is early and will be revised over the next few months.  But still, 0.7% growth for the fourth quarter is positively pedestrian.  In addition, with all four quarters now in, the overall growth rate of real GDP for 2015 is estimated at just 2.4%.  Yuck.  These are the kinds of numbers that give fodder to those who think we are headed toward a recession.

The graph below shows quarterly growth rates since 2005.  As you can see, only the second quarter was above the long run average of 3 percent. 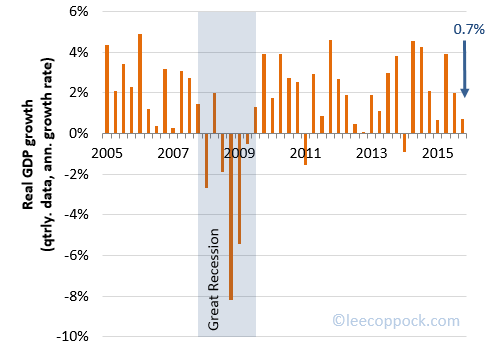 Finally, the table below shows the contribution to the overall 2015 growth rate from each of the four types of spending: consumption, investment, government, and net exports. 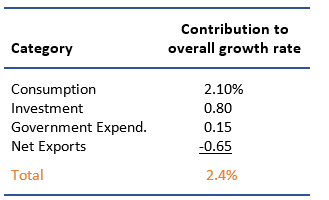 I certainly hope that these figures are revised upward over the next few months.  In the immediate future, I'll be very curious to see the jobs report from the BLS next week.