Why Is Unemployment so High in Spain? 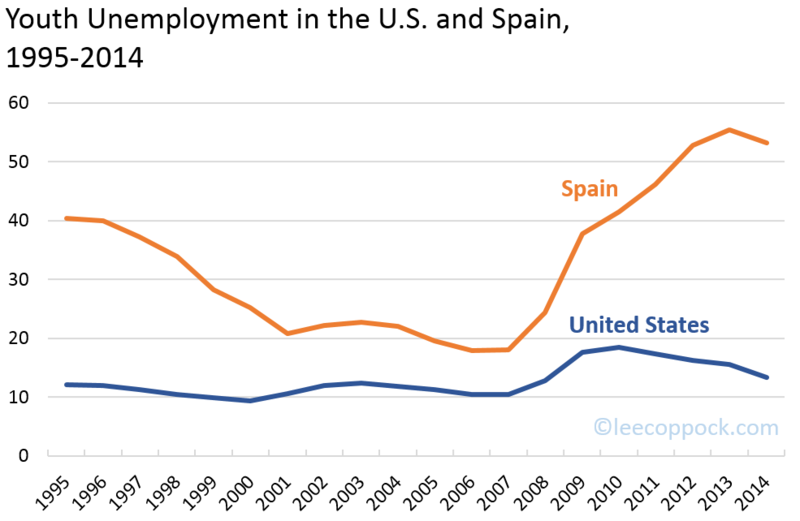 But it is not just rough for the youth of Spain: the figure below shows overall unemployment rates in Spain, which consistently dwarf those from the United States. Economists believe the main reasons for these differences are labor market regulations in Spain – regulations that were actually put in place to help workers.

For example, mandated severance pay in Spain is particularly generous.  Until 2012, any Spanish firm that wished to fire a worker was required to continue to pay them for 45 days for every year they were employed.  Thus, if a firm wanted to fire a ten-year employee, they’d have to pay them for 450 days after their employment ended.  This regulation make it very difficult for young workers to break into the labor force.  They also incentivize firms to search longer for just the right worker to fill open positions.  Both of these increase frictional unemployment.  In 2012 this requirement was reduced to 20 days of pay for every year of employment.

Another regulation is mandated annual increases in wages and benefits.  That is, firms are required by law to give pay and benefits raises every year.  Think about this from the firm’s perspective: before you ever hire and retain a worker for more than a year, you will be sure they are worthy of their current pay plus raises.  These regulations increase the time firms spend searching for just the right match, and again, increase frictional unemployment.

All of this data is available from the Organization for Economic Co-operation and Development (OECD).

Posted at 10:39 AM in Aggregate Demand and Aggregate Supply, Unemployment | Permalink