GDP Down in First Quarter (Again)

Real GDP in the U.S. fell by 0.7% in the first quarter of 2015, according to the latest report from the BEA.  The graph below shows growth by quarters since the beginning of 2005. 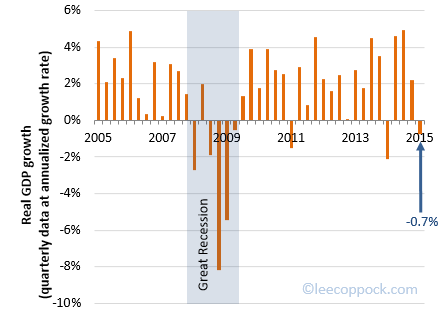 It seems reasonable to ask: what is wrong with the first quarter?  After all, since 2010, there have only been three quarters where U.S. real GDP has been negative - and these were the first quarters of the years 2011, 2014, and 2015.

Economists are of three views on this.  The first two are summarized well by Justin Wolfers here. One is that there are exogenous random shocks have hit the economy, and this has lately been in the first quarter. An example is bad weather (think polar vortex). Second, it is possible that the BEA is not correctly measuring the seasonal adjustments in the first quarter of data.  In other words, the GDP estimate is just wrong.

Finally, Tyler Cowen posits that maybe the economy does naturally go through a seasonal cycle after all.  Perhaps this is related to a lull after the holiday season.  From this view, the first quarter downturn is accurate and should not be smoothed out of the data with seasonal adjustments.

Whatever the case, we can all agree to hope for a large uptick in the second quarter.