Today's GDP report from the BEA shows an estimated 2.5% growth of real GDP for the United States in the second quarter of 2013.  The earlier report from July estimated just 1.7% growth. 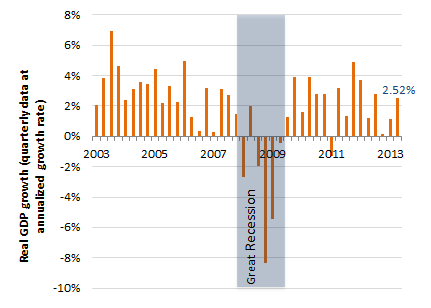 While the new revision is welcome news, the current growth rate is not enough to return the economy to full health and lower the unemployment rate to its natural level.

Kevin Drum at Mother Jones reports on the public perception regarding the deficit and points to a google poll to illustrate his point. The chart below shows the current results.

Why do most people believe the deficit is increasing when we know it has been shrinking since 2011?  Kevin suggests that this is because people are too slow to change their opinion.